Secure your dog door or cat door against burglars !
Read here about the obvious measures, but also a very surprising one ...
17 February, 2020 by

Stories about burglars coming in through dog doors or cat doors are circulating but what's true ?  We don't know for sure, so let's be careful and secure our pet door as best we can.

The stories that circulate have two sides: burglars crawling through cat flaps to get in, but also burglars who prefer to avoid houses with dog flaps because of the dog. We haven't found any statistics but let's be careful and take precautions where we can.

No one will be able to get in through a 20 x 24 cm cat flap, but what about the larger dog doors ? Behind a large dog door … there's a big dog! There won't be many people who would voluntarily sit on all fours in front of a big, strange dog, eye-to-eye. Certainly not if you intrude into a dog's territory that way and can't even use your hands to defend yourself. Quite a risk to be taken by the nose, literally!

On top of that, there's the element of surprise. We have a very vigilant Cavalier King Charles of 20 cm high and at most 10 kilograms. When that Cavalier comes running she won't make much of an impression.  But behind her the surprise follows with some delay: a deep growling Bull Mastiff of 70 kilograms that insists on its privacy. A friendly dog at all times, but I don't give any guarantee on what would happen next.

What about the holidays? When the house is clearly deserted. The plastic dog doors have a sliding door, sometimes made of metal, but that is of such poor quality that a small, quiet push is enough to open it.

It's quite obvious:
A solid closing door! 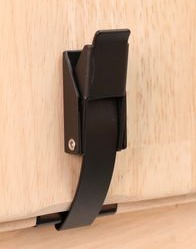 Our closing doors are made of 2 cm thick solid wood. You'll get that broken too, but it won't go unnoticed and will take a lot of effort. The handle and the lock are made of steel, you will notice that care and attention has been paid to the door, it is part of the whole concept.

Because we think this is important, it is not an option for which you have to pay extra, a closing door is standard delivered with every pet door in the webshop.

But very surprisingly:
It doesn't look like a pet door !

Suppose there had been an "ordinary" dog door in the facade of the house in this picture.

That would've caught your eye.

Now an attentive passer-by, wondering what it is, will suspect that it could be a grate, some kind of decoration, ... Who would suspect that this is a dog hatch? 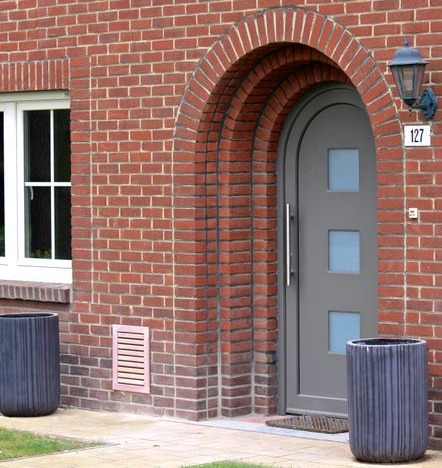 Nothing is completely burglary proof, but by thinking a little deeper about it and with a few extra efforts we took our pet doors one step in the right direction ! Put on the sound with the movie, you'll just hear that it's solid.
Read Next
Installing a dog door or cat flap in a window, glas door or a glass pane.